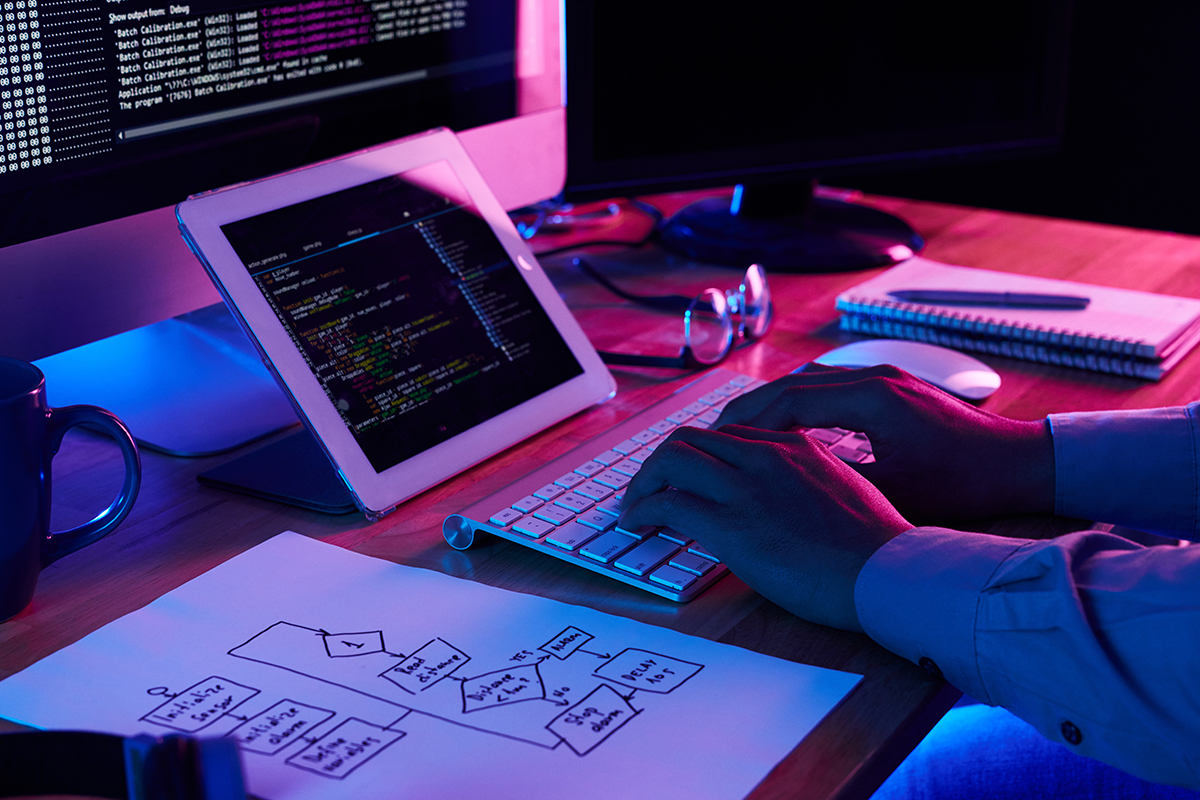 There are certain advantages of using back-end frameworks. These frameworks are lightweight and add a lot of value to a project by making sure that the code is well-structured. Also, the robustness and speed with which these frameworks function ensures there are fewer chances to run into bugs.

Django is a free and open-source high-level Python Web framework, designed for developers who build and maintain high-traffic websites as well as complex web applications. It follows the MVC architecture, and all its apps are written in Python programming language.

Applications are developed on a WSGI server that uses the modular development style to implement what is needed rather than adding everything into the same module. Django, a free and open-source web framework, supports MVC pattern for web development.

CRUD operation supports the maintenance of data and databases. SQLite is a relational database that allows the indexing of records for faster lookup. It also supports database undo and redo logs, database snapshots, and multithreaded access among other things.

Companies like Pinterest, Robinhood, Udemy, Accenture, Coursera, and the Delivery Hero use Django’s back-end framework. Now, let us explore the Pros and Cons of Django and whether it is the back-end framework that your organization is looking for.

1. Eliminates the Need to Code from Scratch: Django is a vast open-source framework, and this ensures that your developers don’t need to code everything from scratch. There is a plethora of functionalities available that they can simply use. In fact, the most widely used features are already present in Django. This not only saves time but also ensures that you focus on the things that matter while developing your web-based applications.

2. Django is Flexible: Django is more flexible when compared to Ruby on Rails. It does not recommend convention over config mechanisms and that provides a dynamic platform, which is flexible to bend to the needs of the developers.

3. ML Enabled: Django is more advanced and a preferred platform for developers who work with machine learning processes. While Flask is also adept with ML, it is a light-weight framework and does not offer the same functionalities and processing power as Django.

1. Not the Best Option for Small Projects: Django is not the best fit for smaller projects with limited features. It is a relatively large framework that takes up a lot of server space and computational bandwidth. Django will only cause more harm than good when used in small scale projects with its unique functionalities.

2. Not Easy to Learn: Django comes with a steep learning curve. Its complex features, functionalities, and configuration make it difficult for developers new to Django to learn and implement it quickly.

3. Development is Slow: Django as a framework is not designed to handle multiple requests at once. This is a major disadvantage as almost all back-end frameworks offer multiple request capabilities.

Flask is a lightweight Python web application framework. It is simple to use, but that does not mean it has limited functionalities. Flask can be used to build anything from a small application running on a single computer to a large site with hundreds of servers handling millions of requests per day.

If your application does not require the extra functionality offered by heavier frameworks, such as Django, then Flask may be perfect for you! Flask is used by many high-traffic websites. Companies such as Mozilla, Instagram, Pinterest, Khan Academy, and Coursera have chosen to build their websites with Flask.

It is inspired by Sinatra for Ruby and works with free software philosophy. Highly readable and intuitive syntax, awesome DRY support out of the box, default development server, and great documentation are all hallmarks of Flask.

Flask’s internal abilities of being a free-for-all framework are unique. This offers a platform for developers to experiment and fine-tune applications to suit their custom needs.

Features an inbuilt server dedicated to development. It has faster-debugging speeds when compared to its peers.

2. Templates compatible with Jinja 2 are at your disposal.

1. Not too easy to scale operations as it has a singular source.

2. The involvement of 3rd party models in web development could open avenues for a security breach.

3. It is not a framework to master and the learning curve is significantly steep.

FastAPI is a modern, fast (high-performance), web framework for building APIs with Python 3.6+ based on standard Python type hints. It is fast when compared to other major Python frameworks like Flask and Django. FastAPI gives great flexibility to fulfill businesses' API needs in today's evolving world.

FastAPI is a framework for building fast web APIs with Python language. It's a Python framework on Google App Engine with flexible infrastructure, which is fast (was tested to be 100x faster than other major frameworks like Django, Flask).

Are you tired of converting cURL commands back and forth to use them for automated testing?

The key to executing automated web testing has a framework that takes care of the tedious work by providing out of the box capabilities like mocking web requests and response. And there is one such framework, Test RESTful APIs (FastAPI), which makes it possible to test rest endpoints without coding.

Netflix, Uber, and Amazon are some of the million-dollar organizations that leverage the potential of FastAPI.

1. Asynchronous programming makes it faster by eliminating waiting periods between calls and runs other tasks with the same thread in use.

2. Type hints open a lot of readability and this promotes process developments. Type hints when combined with the right variable naming, can be of immense help.

3. FastAPI comes built-in with Swagger and ReDoc. This is a huge plus when compared to Flask’s framework that does not come with a built-in Open API.

The major disadvantage that comes with using FastAPI is the relatively smaller community it has. While there are more and more developers joining this small pool, it is still not enough to promote rampant process developments or initiate product improvement sessions.

Laravel is one of the most popular PHP frameworks for building powerful and robust applications. Since its inception in 2011, it has received wide vendor support that has increased its popularity amongst developers. With enhanced features and plugins, you can build a dynamic website, mobile application, and much more.

Its syntax is expressive and elegant and allows you to develop complex websites and apps within a short time. A user-friendly interface, strong community support, and extensibility are some of the reasons for developers' preference towards this framework.

The Laravel framework is designed to offer native APIs for authentication, authorization, and rate-limiting services. The framework comes in handy if you require database migrations for your application as they can be executed easily using the command line tools.

Laravel offers an excellent code organization with packages that follow the modern PHP standards. The Laravel Lumen framework provides a robust set of features that support minimal development at a higher level with automatic testing, caching, and encoding built-in.

Additionally, Laravel is the open-source version of the Laravel framework used by millions of developers and businesses across the globe to develop a wide range of applications. Laravel has also made a significant mark in the web technology industry, thanks to its highly interactive and functional features.

Tech and Non-tech giants like Pfizer, 9GAG, BBC, Tour Radar, Pedidos Ya, and Crowdcube use Laravel.

1. Laravel is always up to date with developments in PHP. Features like Namespaces, interfaces, Shorter Syntax arrays, and anonymous functions were made available as of 2019. With new versions, developers working on Laravel will be able to leverage the potential of the ‘Guzzle Wrapper Package’.

2. Laravel as a framework has proper documentation on every product and process updates. It is easy to read through their documents and understand the nuances of every update.

3. Artisan is Laravel’s command interface that allows developers to build skeletal codes and this eliminates the need for developers to perform routine tasks.

1. Not the Best In-Built Support:

Laravel is a light platform when compared to its peers Django and FastAPI. Thus, has an in-built support system that is not able to compete with that of its competitors.

This, however, can be quickly resolved with 3P assistance.

Laravel is a PHP framework, and PHP is known to have some issues with certain upgrades. While this is not the best thing the developers like about Laravel, they are known to fix these things by paying a little more attention in the coding phase.

Spring Boot, an open-source, lightweight framework, is used to create stand-alone and production-grade Spring-based applications. Based on Java, it is built on top of the Spring platform and designed to take advantage of the containers and applications in which it runs.

One can easily connect it with third-party services such as MySQL and MongoDB. Spring Boot is easy to integrate with other frameworks such as Hibernate and JPA. The framework offers several features that are easy to use and help avoid complex XML configuration and build production-grade applications quickly with ease. It also helps create REST endpoints and enables the developers to manage dependencies efficiently.

Spring Boot is an advanced extension of Spring, which is opinionated and more scalable for testing, product development, and deployment.

1. It is easy to autoconfigure all the components and functions for a production app with this framework.2. Developers can access Spring’s ecosystem that consists of:

It is easy to integrate Spring Boot with Oracle DB, MongoDB, MYSQL, etc.

1. It is important to understand how the other spring systems work to be able to fully utilize the potential of Spring boot.

2. It is not the framework that gets the highest number of recommendations when an organization wants to build large, monolithic applications.

If you are on the lookout for a technology team that could design and execute a custom technology integration plan for your business, your search ends here.

We, at Fission Labs, are the pioneers in integrating technological solutions for organizations of all sizes across various sectors. Our team of experts is well-versed with existing tech stacks and upcoming innovations in futuristic technologies. Contact us for a free consultation on leveraging our technological prowess to help your organization achieve its goals.